The Anatolia News Agency said, on Friday, that the chances of success of PM Dbaiba’s plan to hold elections supervised by his government are limited in the absence of implementation mechanisms.

The agency added in an analytical report on its website that even if Dbaiba succeeded in organizing elections in Tripoli, this would lead to division, and would not remove the specter of war.

The agency indicated that the Electoral Commission is unlikely to respond to Dbaiba’s move, and that the Administrative Control Authority rejected it, and that the constitutional declaration does not give the government the authority to submit laws to Parliament.

The agency indicated that the announced stance of the Presidential Council is not on line with the “Dbaiba” government, and the Commission does not show enthusiasm in organizing any elections without a green light from the House of Representatives.

And the agency added that “Dbaiba” is facing a dead end, and the statesmen who were gathered around him do not provide him with the necessary support in the darkest of circumstances, and the best of them prefer neutrality and wait for whom the balance is tilted to.

It is worth noting that Prime Minister Abdul Hamid al-Dabaiba announced on February 21 what he called “a plan to return the trust to the people,” which calls for holding parliamentary elections next June. 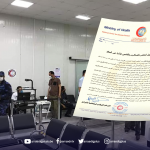