The head of the Tarhuna Victims Association, Abdl Hakim Abu Naama, confirmed that the security services were able to arrest a member of the Al-Kani militia called “Abdul Raouf Al-Tabeeb.”

Abu Naama added, in a press statement, that the “Al-Tabeeb” is accused of the crimes of mass graves and abusing the corpses in Tarhuna, and that they are awaiting the results of the preliminary investigations with him.

And Abu Naama pointed out that the security services had managed last week to arrest “Nuri Hafeez” in Tajoura, a member of Al Kani gangs, and one of the most prominent persons involved in kidnappings and mass graves cases.

Abu Naama explained that Hafeez is the first suspect in the case of the kidnapping of (Abu Rabiqa), a livestock dealer who was kidnapped in Tarhuna, and his fate is still unknown until this moment. 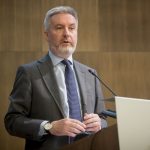