The official for receiving complaints and at the Anti-Corruption Authority, Salah Khalifa, said that filling out the financial disclosure declaration for candidates for prime minister not necessity before submitting the candidate’s file to the HoR.

Khalifa explained, in press statements on Wednesday, that the candidate’s file is considered incomplete if it does not contain a financial disclosure declaration, stressing the need for the candidate to attend the authority’s office to fill out the declaration, even after submitting his candidacy papers.

It is worth noting that MP, Abdul Moneim Al-Urfi, confirmed, in a statement to Arraed Thursday, that the parliament has so far received the files of 3 candidates for prime minister, who are “Fathi Bashagha, Marwan Omeish, and Ahmed Maiteeq.”

On Tuesday, the National Anti-Corruption Commission had asked the candidates running for head of the new government to submit their financial disclosure statements, at the authority’s headquarters in Al-Furnaj area. 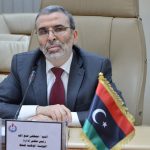