Turkish Foreign Minister Mevlüt Çavuşoğlu stressed that holding elections is one of the most important method to ensure the unity of the state in Libya.

On Friday, according to Anadolu Agency, Çavuşoğlu criticized Western countries for setting a date for elections in Libya, with the Libyans assuring that the conditions were not appropriate for holding them, adding that this was the reason for postponing the date, according to him.

On Thursday, Turkish presidential spokesman Ibrahim Qalin had expressed his country’s hope that the new political process in Libya would be announced soon within a specific timetable. 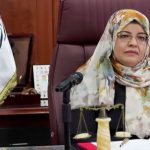